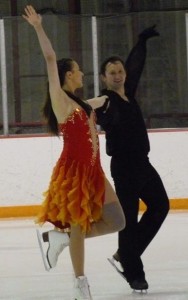 What is Ice Dancing?

Ice dancing is a form of figure skating which draws from the world of ballroom dancing.  It was first competed at the World Figure Skating Charmpionships in 1952, but did not become a Winter Olympic Games medal sport until 1976.  First developed around the turn of the 20th century in the United Kingdom,the sport continues to delight people all over the world.

The concept behind ice dancing is to present a graceful and entertaining routine that could easily be moved to a ballroom floor and still be performed with similar results.

For information on ice dancing or to schedule a private lesson, please contact Skating Director Kelly Orndorff @ k.orndorff@comcast.net or 301 662 7362, ext 16.